Quite a few photos here including street scenes, outdoor markets, and of course, Temples and Pagodas. Cambodia and Thailand are studies in contrast. The beach resorts we visited are first rate. Not so much the villages and small cities outside the upmarket tourist areas. 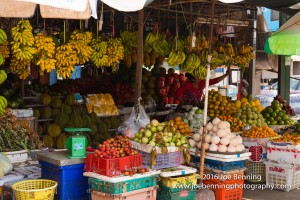 The 2 countries share an early past, when the Khmer Empire (Hindu and Buddhist, combined with traditional beliefs such as animism) was the dominant civilization in the area.  In 1238, the early Thai overthrew the Khmer leaders, using their prowess in growing rice to gain power. Over time, Thailand maintained its autonomy by trading out parcels of land to western countries which wanted to colonize the area (Cambodia and Laos went to the French while parts of Malay went to the Brits, etc.).

In more recent times, Thailand has continued to be independent (although it has aligned with various powers in the world wars). And though Cambodia is also independent today, its role in the 1970s left it scarred. In Cambodia’s earlier days (12th century), magnificent temple complexes such as Angor Wat were built, and a highly civilized society existed. But Cambodia had its share of trouble fighting off the Thais and Vietnamese, and spent some years as a French protectorate.

Communist Khmer Rouge rebels seized control of Cambodia and installed a regime led by Pol Pot in 1975. Almost half of Cambodia’s more accomplished citizens were massacred as Pol Pot tried to bring the country back to “Year Zero” as a completely agrarian society; all western civilization’s progress was subject to destruction as towns were emptied (city citizens were told to leave their homes in one day and relocate to the countryside), educators and the educated were killed, religion was banned, land was confiscated, money was forbidden, media were silenced, children were sent to work camps, etc.  Over the course of 4 years, it is estimated that 3 million Cambodians were killed by the Khmer Rouge (approximately 25% of the population). The Khmer Rouge finally signed a treaty (the Paris Peace Accords) to end their reign of terror in 1991.

Now Cambodia struggles to bring its 15 million people out of poverty, improve low literacy rates, stimulate tourism to its beaches, recover and redevelop large areas of rubble and trash, develop the oil and natural gas deposits under its waters, and increase trade through its port. Sanitation, health care and education systems are fairly primitive, and we saw several victims of land mines from the Vietnam War era begging in public markets and shrines. The future can’t get here fast enough.

Thailand (the “Land of Smiles”) is a constitutional monarchy with a population of 65 million who adore their King, a former Buddhist monk and a saxophone player of some repute – road signs and flags abound proclaiming long life to the King, who is in his 80s now. Thailand has lots of natural resources and exports (silk, rice, coconut, palm, tapioca, sea salt, fish, fruits). It’s a Buddhist stronghold (95% of the population and home to 300,000 monks), and has an established and thriving tourism base.

Thailand’s government that often winds up in the hands of the military when the farmers and small business owners (the “red shirts”) clash with the elites/monarchists/judiciary/military leadership (the “yellow shirts”).

Bangkok is called the Venice of the East due to its old system of canals (before cars and motors, trading was conducted via boats that roamed the canals selling their goods to those on the shores). Canal markets are still used in Thailand. Many temples and shrines can seen in the cities, mixing with old and new buildings and resorts.

Yes, the story of Anna and the King is true. It’s based on the writing of Anna, who was brought to Siam by the King to teach his children; he valued literacy and education, and appreciated western thought. But Anna’s book was deemed disrespectful, and is banned in Thailand.

So we see again how old and new mix – learning is valued, but so is respect of the past.

Wishing you all a very happy St. Patrick’s Day!