We are in the home stretch, sailing through Glacier Bay in Alaska where it’s cold, gray and snowy. But, we have seen plenty of glaciers. The size of these things, and the way they move, is simply incredible. The photos here include Margerie Glacier —a giant river of ice—that moves 7 feet a day. This glacier is 250 feet high–the equivalent height of a 25 story building.

Tomorrow we will be making our way to Skagway where we will do some whale watching.

We sailed through Hubbard Bay today and got up close to a massive glacier. You have to see it to believe it. Here are some photos–but they don’t really show the scale of the glacier–the icy blue part at the bottom of the mountain. 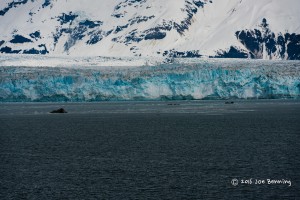 We spent today in Seward, Alaska where the weather alternated between rainy and sunny. Now we are on our way to Glacier Bay, where we will be out of satellite range for a couple of days. Anyway, here are some photos of Seward, taken at different times of day and different weather and lighting conditions.

We visited Kodiak Alaska–the second largest island in the U.S.–along with its spectacular coastline and forests; its nature refuge, Kodiak bears, and its huge fleet of fishing boats. By the way, Kodiak bears can grow up to 10 feet tall and weigh 1,400 pounds. Fortunately we didn’t bump into any of these bears while hiking in the forest. Anyway, here are some photos from Kodiak.

We are now sailing away from Kodiak and on to Seward where we will arrive tommorrow.

We arrived in Dutch Harbor, Alaska on Saturday, and the mood on the boat was noticeably cheerful – not sure if folks were glad to be back in the USA (using familiar currency and language), or glad to be on land after 3 days at sea (we had two Thursdays, because we crossed the international date line), or glad to be on the last leg of this long cruise, with only 2 weeks left to go.

In any event, hundreds of us poured off the boat to see the town, which is where the “Deadliest Catch” TV show is filmed.  We expected a kind of “Northern Exposure” town (remember that old TV show?) but it was a little different.  About 4000 people live in Dutch Harbor.  This is a major fishing port, and has been the #1 commercial fishing port in the USA for 19 years.  There is also an international airport here, which gets a lot of action because so much travel in this part of the world is by large or small plane.  Apart from the port and the airport, there are 2 nice museums, some businesses, and some eating/drinking places, spread out over a few miles on a few roads (no town center, per se).

We visited the Museum of the Aleutians, and learned a bit about the history of the Aleutian Islands and the Aleuts, including its Russian history, its role in WWII (the only place in the USA bombed besides Pearl Harbor, and location for 9000 troops during the war), the fishing/whaling/sealing that has sustained people in this area for thousands of years, and how people have survived in this harsh environment over time.   Although it was a little strange not to find any temples or Buddhas, this is still a very exotic part of the US with a history unlike so many other states.

This area hosts a lot of outdoor activity in the warmer months, and is home to many parks where you can enjoy birdwatching, hiking, biking, golf and other fun.

There’s a lovely Russian Orthodox church in Dutch Harbor as well as the Cathedral of the Holy Ascension; for one week each month a priest comes by plane to the Cathedral to attend to the spiritual needs of the parish.  Similar visits by plane are made by medical professionals and others who care for people in remote areas.  The local middle-high school has under 100 students in total (that’s about 12 per class).

Our day started out sunny, and passengers from the ship got out in the early morning and walked to some of the local attractions (1-2 miles).  Within about 3 hours from our arrival in Dutch Harbor, clouds formed and a brisk wind swept in.  Passengers started coming back to the ship, well in advance of the 4:30 pm deadline for reboarding.  By noon a nice sleety rain had started, and it was COLD out.  The ship was able to leave port ahead of schedule because nobody was outdoors by mid-afternoon.  And I think you probably heard a low buzzing noise in the lower 48 states by 5pm, since it appeared that almost all passengers were snoozing before dinner (not me, however!).

So while we sometimes lament the density of where we live, we can also be thankful that it’s not too remote and hard to reach.

PS – Internet coverage for the next few days is supposed to be sketchy, so you may not hear from Joe or me during this time.

We have docked at the port of Dutch Harbor, at Amaknak island, one of the Aleutians. Here are some photos, including photos with storm clouds forming.

We have just docked at Petropavlovsk after sailing from Sakhalin Island. Here are some photos.

Just a few hours heading north in the Pacific Ocean and you go from relatively mild early Spring weather in Japan to sub-zero snow in Russia! We visited Korsakov on Monday, on the island of Sakhalin, about halfway between Japan and Russia in this area of the world. This island was settled by the Japanese during the Edo period (approx. 1600-1870), but has been the subject of contests between Japan and Russia since that time, through the end of WWII, when the island was awarded to Russia. Not many people live on the island, and much of it is forested. The island industries include farming, fishing and tourism – this island is a haven for birds, seals and other wildlife, so lots of people come to take in the natural wonders.

The island also holds many Daccha – the summer houses of the Russians.  We passed many on our drive – small houses on small plots of land, with vegetable and flower gardens ready for planting when the weather thaws.

We travelled to the capital city of the island (Sakhalin), and visited a Russian Orthodox Church constructed in the “old” way – no nails, just wooden pegs holding the logs together. On our trip we passed many churches, some with the colorful and picturesque onion shaped domes.

We visited the Anton Chekhov Museum, and learned more about this writer (who was also a physician). Chekhov visited Sakhalin in 1890, to interview convicts in Russian work camps; he wound up staying for three months, taking a regional census in addition to compiling the prisoner interviews which ultimately became “Sakhalin Island.”

While in Sakhalin we also visited the Regional Museum, which was established by the Russian population during a period when the Japanese ruled the island, to preserve and commemorate Russian history and its people. The Museum is in one of the only buildings on the island that retains its Japanese style architecture.

After another rough night on the sea (lots of ice and lots of speed to make up for the very lengthy immigration processing we experienced at Korsakhov), we have arrived at Petropavlovsk, one of the most isolated large cities in the world (no roads connect it to the outside world). The captain wasn’t entirely sure we’d be able to anchor and visit this island, as the weather is sometimes too inclement to permit tender service. He told us today that last night “we drove the boat like we stole it” in order to make time.

Petropavlovsk was isolated from the world until 1991, especially during earlier years when it housed Russia’s largest nuclear submarine base and military radar installations.

Petropavlovsk is surrounded with natural beauty in the Kamchatsky Peninsula, a mountainous region on the Bering Sea that is part of the Ring of Fire (the circle of volcanoes that encircle the Pacific). This peninsula has 68 active volcanoes (that’s 10% of the world’s active volcanoes), 5 nature reserves, the world’s densest population of brown bears, and a thriving fishing industry.

While on this part of our journey, we’d learned a bit about Vitus Bering, who founded Petropavlovsk (which he named after his two sailing ships in 1740, the St. Peter and the St. Paul). Bering was a Dane who explored Russia and the Aleutian Islands, trying to ascertain where Alaska ends and Russia begins, or whether they were connected by a land mass. The 53 mile gap that we call the Bering Straits is now the water that separates Asia and North America.

Looks like we’re in for very cold weather for the next couple of weeks, but we hope you are all enjoying the start of Spring, and we will be too, very soon!

PS – the sad end to our story – the wind at Petroplavask was so strong that the tender boats could not safely get passengers to the dock, so we spent the afternoon on the ship, and most of the passengers were somewhat thankful that we didn’t have to brave the cold wind (you can tell some of us are getting old). 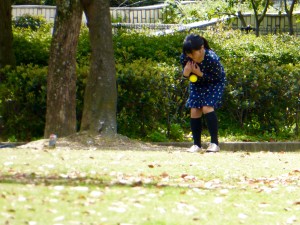 now this gal shows my level of athletic prowess!