We docked for a day in Dunedin. It is a small town settled by people of Scottish descent, so not surprisingly, the town’s architecture is similar to  that of small towns in Scotland. After doing on the port we proceeded to head out to board an old-fashioned steam train for a ride through the countryside.

The ride revealed more spectacular scenes of the New Zealand countryside, including vast expanses of farmland devoted to dairy cows and sheep. Here are a few photos of what we saw.

Back again. We’ve been touring around like mad, and haven’t had a chance to post. On February 21, we entered New Zealand’s territorial waters and spent the day cruising through Milford Sound and some other Fiords (the NZ spelling) which were formed tens of thousands of years ago by retreating glaciers.

These Fiords, similar to the Fjords in Canada and Alaska, Fiords are a remarkable sight.  It is like cruising through a deep valley with mountains rising up on either side.  And we are far, far away. New Zealand is about as far away from New Jersey as you can get. As the crow flies, Stewart Island, the southernmost part New Zealand where we are headed, is only 3,000 miles from Antarctica. In fact, it’s a drop off point for some expeditions.

Anyway, here are some photos from the Fiords.

We have left Australia and we are on our way to New Zealand. On our last evening in Australia we went to a gala event in Sydney’s Town Hall, itself an architectural wonder. Outside we were met by Aborigines in native dress. Inside we were treated to natives playing traditional Aboriginal music, some classical pieces played by Argentine virtuoso Hector Olivera on the 8,000-pipe organ in the Town Hall, a truly stunning performance by the Australian Girls’ Choir, and more music by Australian vocalist Phillip Mark Quest, who won the Laurence Olivier award for Best Actor in a Musical no less than 3 times.

And we don’t want to forget the excellent vineyards, rain forests, animal habitats and great hospitality of the Aussies.

Here below are a few more shots taken around Australia. In addition, there are about 100 or so additional Australia photos posted on Evocative Photos at much higher resolution.  So, if you get a chance please visit www.evocativephotos.com 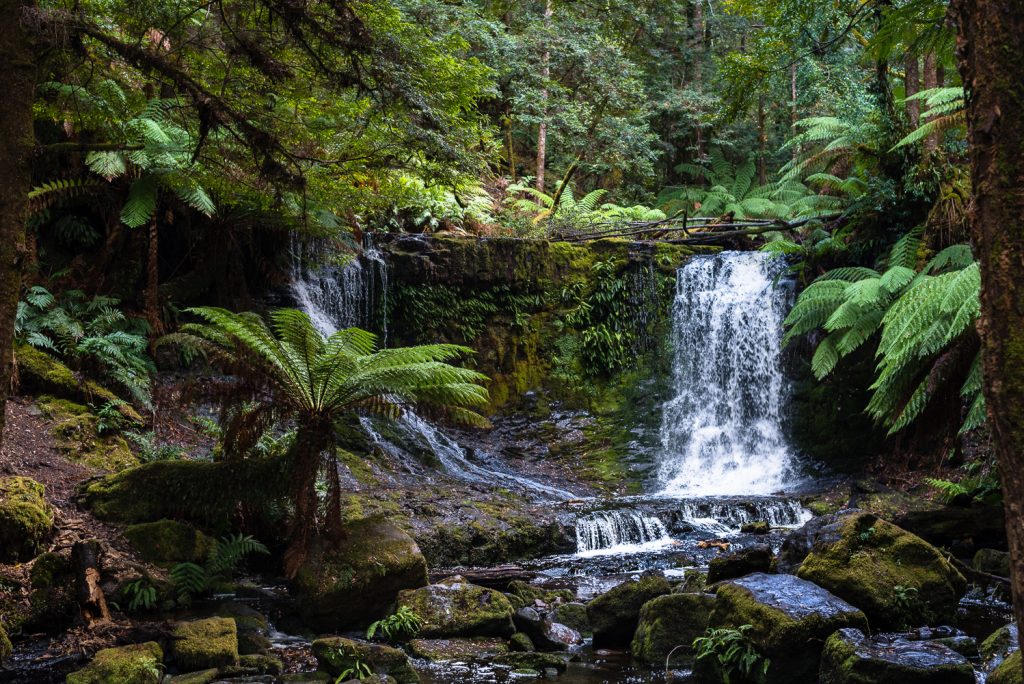 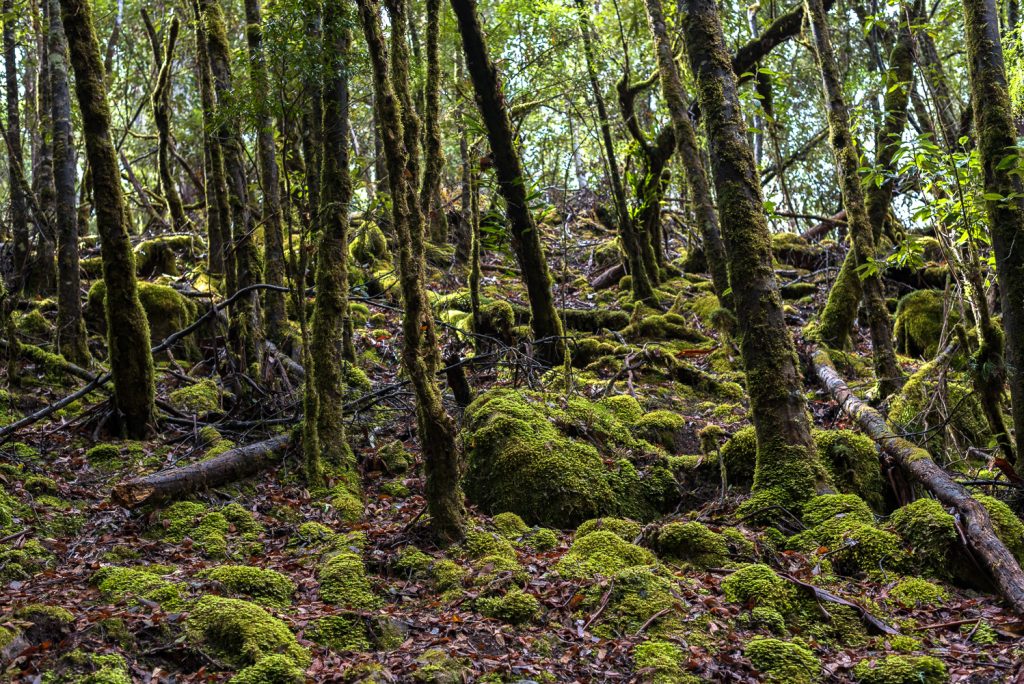 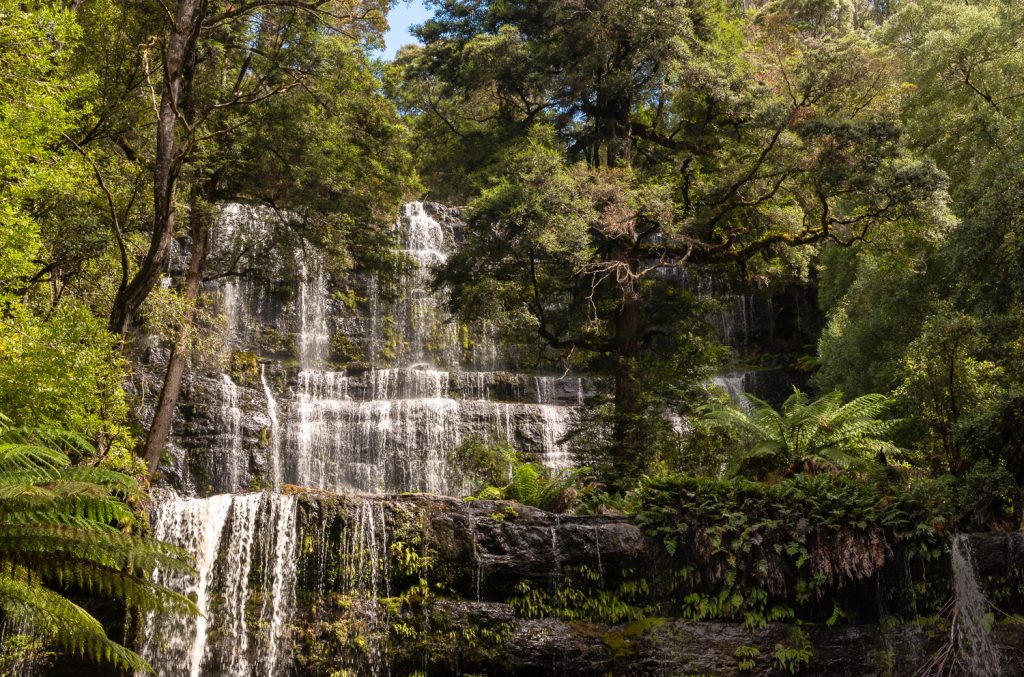 Vineyards, beautiful beaches, wildlife reserves, stunning landscapes—Australia’s got them all. After spending a lot of time at sea now we are hopping off the ship almost every day to visit sites on land. That includes Perth, Freemantle, Geraldton, Bunbury, Albany and Esperance.

So we visited and had lunch at several vineyards with excellent cabernets, pinots, chardonnays and sauvignon blancs. There are plenty more vineyards in Australia and New Zealand on the schedule of what is becoming the world wine-tasting cruise. Beyond the wine, there are the kangaroos, the camels and various birds and reptiles at the wildlife reserves. And the beaches are simply spectacular, although you have to watch where you swim. It’s a really good idea to pay attention to the shark sighting signs.

We have set sail from Esperance and we are on our way to Hobart, a city in Tasmania. We’ll report in from there as well. In the meantime here (below) is a selection of photos from some of the places we visited in Western Australia in the last several days. Before long we will post better quality photos with higher resolutions at our licensing site Evocative Photos, at this link: www.evocativephotos.com.

In the meantime, if you click on any of the photos below a light box will materialize so you can easily view them in a larger and better-lit format.

Eight days at sea is a long time, so we were glad to finally arrive at the port town of Broome, Australia. Located in the Northwest of Australia on the coast of the Indian Ocean on the traditional lands of the Yawuru people, Broome is a small port town that is famous as a center for the Pearl trade and as a tourist town. The population, normally around 15,000, swells to 45,000 during the tourist season.

The oysters in the area are well-known for their pearls and divers by thousands have sought their fortunes by making deep (and dangerous) dives to retrieve them. There are enough pearl shops in the small town to be dangerous as well, although not the same way. In 1879 Charles Harper suggested that the pearling industry would be well served by using the port at Roebuck Bay by Broome, which is close to the pearling grounds where the divers worked. That put Broome on the map, and it eventually became a tourist attraction as well as a center of the pearl industry.

Even though the town is small by population, there is a lot to see. We went to the center of town and successfully avoided the pearl dealers. More importantly, we went to a wildlife park where we saw crocodiles, lots of them, where they are protected. There are about 2,500 of them in all. After you see these guys at feeding time and hear their jaws snap shut, you pay rapt attention to the safety instructions of the guides.

After the crocs we visited Cable Beach where they often have camel rides—but not this time because a few days prior a cyclone swept over the area and the beach needed repair. And after that we visited Gantheaume Point, a truly spectacular lookout point and lighthouse near cable beach with red rock formations overlooking the Indian Ocean. 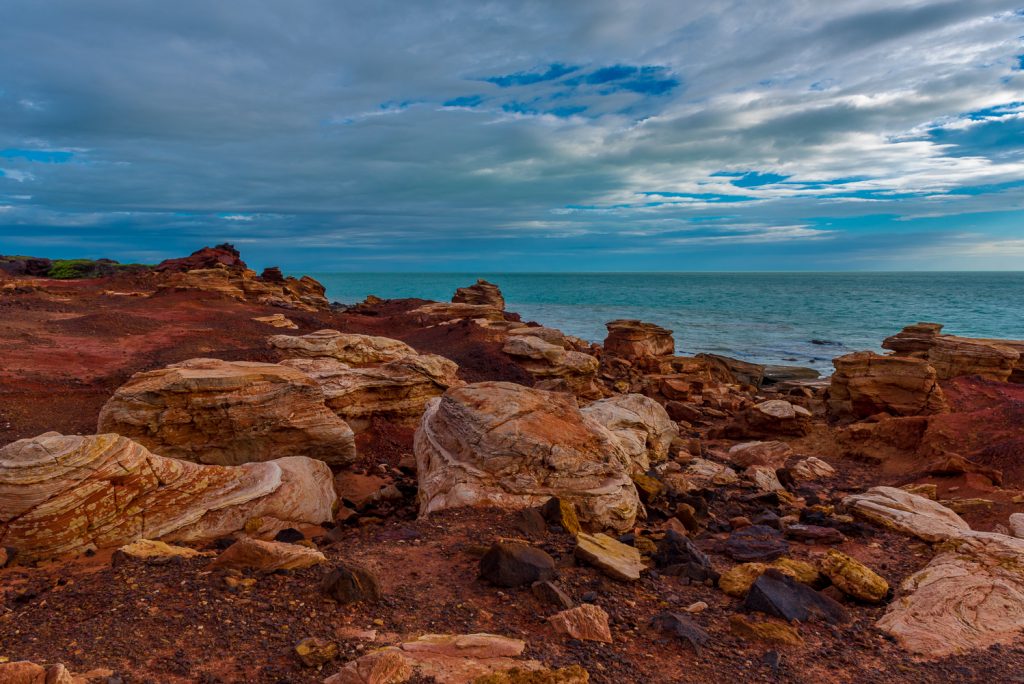 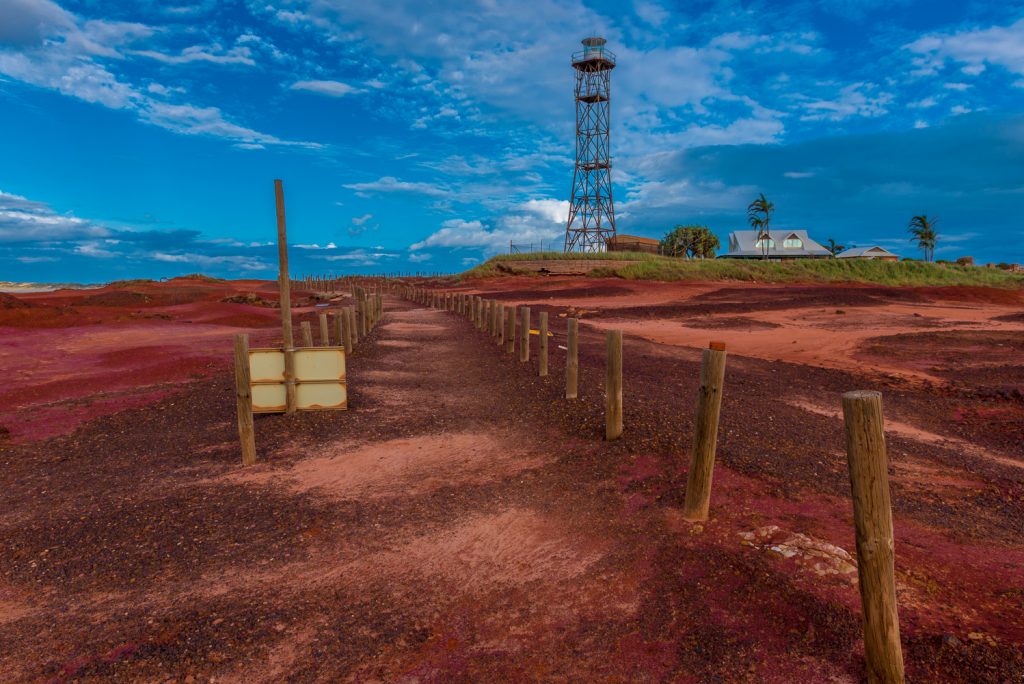 And next we set sail for Geraldton, the last stop before Perth.