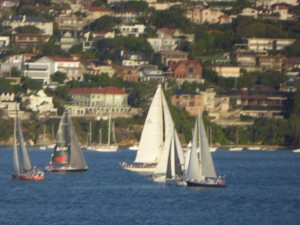 Two busy days in Sydney. Among other things, we toured the iconic Sydney Opera House.

We visited an Australian wildlife reserve.

And we walked along the Sydney Harbor on a walking tour of “The Rocks” a section of the city.

Another lovely day in Sydney – weather was breezy, sunny, dry and warm.   We left the ship early, and took a short tour of Sydney’s Rocks District. This is the area near Sydney Harbour where the “First Fleet” landed in 1788; 11 ships carrying 776 prisoners (male and female, mostly convicted of theft and other non-violent crimes). Since the USA had declared its independence from England, another location had to be found so that England could rid itself of troublemakers, and Oz was just the place.

These prisoners were transported to Australia during a period of 80 years (over 162,000 people). They had the opportunity in most cases to work and earn their freedom. Many elected to stay in Oz because the prospects for work and success were greater than in England, and the Australian social system was more forgiving than the British social system (you didn’t need to be born into the elite classes in Oz, you had the chance to succeed on your own merit). This independence and self-reliance are still cherished traits here in Australia.

So the First Fleet lands, and in 10 days the sandstone hills (the “Rocks”) around part of the harbor are cut and assembled by the male convicts into buildings to house the convicts (women and children were allowed off the ships once housing was ready for them). Over time, the Rocks area develops and grows into a huge slum, before it is redeveloped with proper plumbing and other systems. Many of the streets and buildings from the 1800s are still in use (after their modernization), and the area is filled with boutique shops, restaurants and pubs, offices and residences.

We visited the first Anglican Church in Sydney, which has three entrances: one for soldiers, one for the convicts, and one for the free settlers.

We learned a lot of history today about the development of Australia, including the explorers who discovered the land in the mid-late 1600s, Captain Cook’s arrival in 1770 and his discovery of fresh water near the Sydney Harbour, the gold rush of 1850, the various British governors (including Macquarie, whose vision for Sydney’s future led him to create Australian currency, and whose name now graces one of Australia’s large financial institutions), how the Aboriginal people (in Oz since 28,000 BC) were dealt with, and how eventually the Commonwealth of Australia was established in 1901. By the way, the coat of arms of the Commonwealth includes 2 endemic animals (the emu and the red kangaroo), chosen because they are unable to walk backwards, and must therefor go forward, as the nation will.

We are resisting posting 1000 pictures of the Opera House, but it is an attractive target for the camera. We’ll try to find some interesting ones tomorrow, when there is time because we are at sea, on our way to Brisbane.

Hope all goes well with you.